Home Team Mortgage is comprised of knowledgeable and seasoned mortgage professionals eager to assist in the home ownership process. With an office located in each Ebby Halliday Real Estate branch, Home Team Mortgage loan officers offer the convenience of one stop shopping coupled with the expertise to ensure peace of mind for borrowers and agents alike. For 15 years, Home Team Mortgage has been committed to building long lasting relationships by providing exceptional service with competitive rates and welcomes the opportunity to make your home buying experience the best it can be.

Tom’s first post will be coming soon, in the meantime, be sure to subscribe to the Ebby Blog by clicking the “Subscribe by Email” button at the top left, and check out Home Team Mortgage at hometeammortgage.com to get pre-approval information and to contact any of our loan officers.

Ebby’s 100th birthday party at the Meyerson Symphony Center continues to make news. You’ve probably already seen party pics in several newspapers and magazines and you’re likely to see many more in the coming weeks. For those of you who did not attend (and even for those of you who did), one of the best recaps of the entire night comes from the lady in town who never misses a party. In fact, she’s been known to cover 5-6 different events in one night. To read the literal play-by-play of Ebby 100 from the eyes of Jeanne Prejean, check out her Sweet Charity Blog.

And below in two parts is the video introduction that aired that night, right before Mario Frangoulis and Andriana Chuchman took to the stage. Enjoy.

Her foundation aims to preserve America s wild horses by establishing a plan for their permanent retirement and care. The goal is to build a Wild Horse Eco Sanctuary on private and federal lands to provide long-term care and permanent protection for non-adopted wild horses and burros that have been removed from federal rangelands.

The Ebby Halliday Companies are proud to support Madeleine Pickens and quest to save America s Mustangs.

Yesterday marked the official arrival of the spring season and everyone seems to be enjoying this great weather. Not only that, but the spring real estate market seems to have come a bit early this year and Ebby Associates are busier than ever, which is always a good sign.

We thought it would be fun to take a look back to late January when we shot the cover for the Spring 2011 issue of Grand Vie. This was about one week before the snowpocalypse hit the Metroplex and the grounds of the incredible French mansion at 4236 Armstrong in Highland Park looked anything but spring-like. So how do you overcome such a conundrum? Just call Dr. Delphinium.

As usual, the Dr. D crew showed up with a truck full of spring flowers and spent the next few hours covering bare spaces in the flower beds with cut greenery, “planting” faux tulips, and strategically arranging potted flowers to make them appear planted. You might be interested to know (and much to the dismay of the many passersby) that there was much rearranging in the beds and in the final photo, only one side of the house was decorated. The other side was cloned later.

You can see the final result on the cover of the current Spring 2011 issue of Grand Vie Magazine. You can also see some of the behind the scenes action that went into the making of the cover at the video below or the photo gallery at the Ebby Halliday Facebook Page.

The buzz continues over last week’s circus-themed Ebby 100 Gala at the Meyerson Symphony Center. For those of you who were unable to attend, we would like to share some incredible photography documenting the events, courtesy of Dana Driensky and Daniel Driensky. From the patron party the night before at the home of Jeff Rich and Jan Miller to the gala itself, complete with cotton candy, popcorn and bubble gum martinis, it was truly a memorable night. Enjoy the photos at the Ebby Halliday Facebook Page. 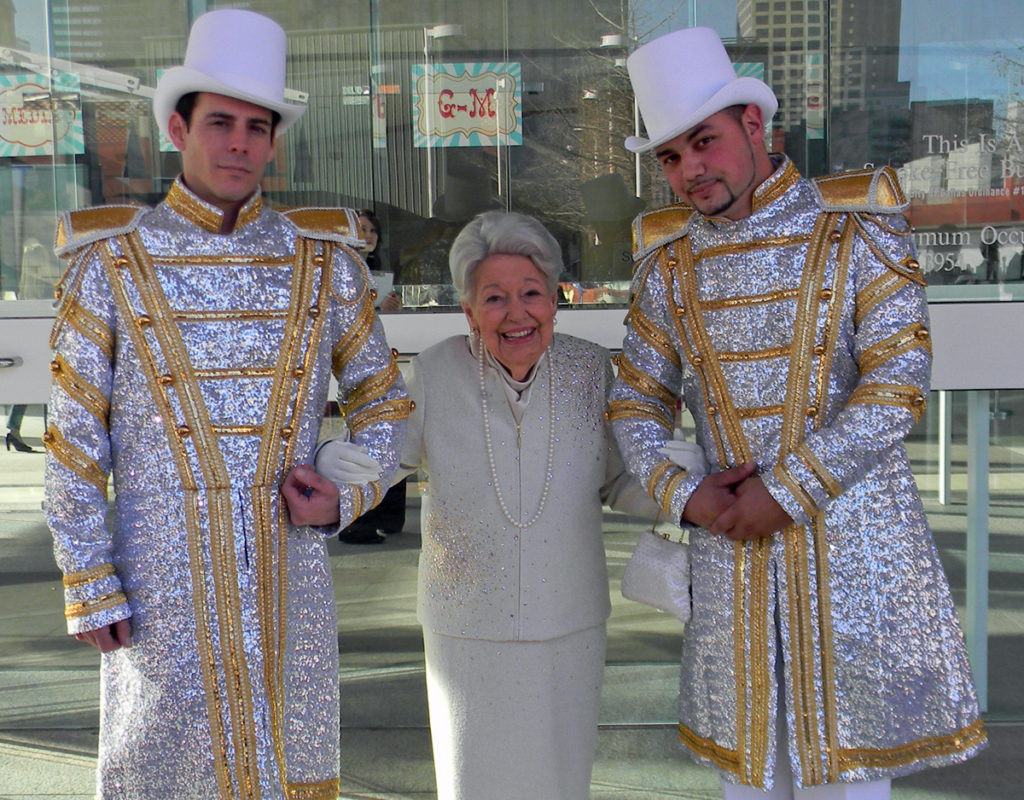 While the talk about last night’s extravaganza is likely to go on for a while, perhaps the best summary of the evening is the video below produced by The Dallas Morning News. More to come on the big event, but until then, enjoy the video and photos at the link below.

This week s birthday girl, Ebby Halliday, sat down with local news legend, Bobbie Wygant, recently to discuss the last 100 years and Ebby s upcoming centennial celebration. The interview, which aired on NBC5 Saturday morning, marked the first time the two had met. It was a special moment for the local trailblazers who share many commonalities. Bobbie (born Roberta Frances Connolly) began her career at KXAS-TV (NBC) when it was created in 1948, just three years after Ebby (born Vera Lucille Koch) began her now legendary real estate career. While Ebby is known for her tenacity in real estate over the years, Bobbie is recognized for conducting hundreds of celebrity interviews, including Harrison Ford, Dolly Parton, Tom Hanks, Shirley MacLaine and James Cameron among many others.

This time, Ebby was the celebrity and the two Dallas personalities were thrilled to meet. Read about the special meeting here and watch the full interview here. And see behind the scenes at the video below.

Clarice Tinsley of Fox 4 News named Ebby a Hometown Hero in a video segment that aired today at 5:30 pm. It will rerun tomorrow, Tuesday, March 8 at 12 noon.

See the full video and read the article here.

If you missed Ebby’s appearance on Good Morning Texas this morning, you can see the full interview below.

She was in studio talking about her upcoming 100th birthday and the Ebby 100 Gala on Wednesday night at the Meyerson. Proceeds will benefit the Ebby Halliday Scholarship Fund through the Horatio Alger Association of Distinguished Americans.

To learn more or to purchase tickets, visit Ebby100.com.