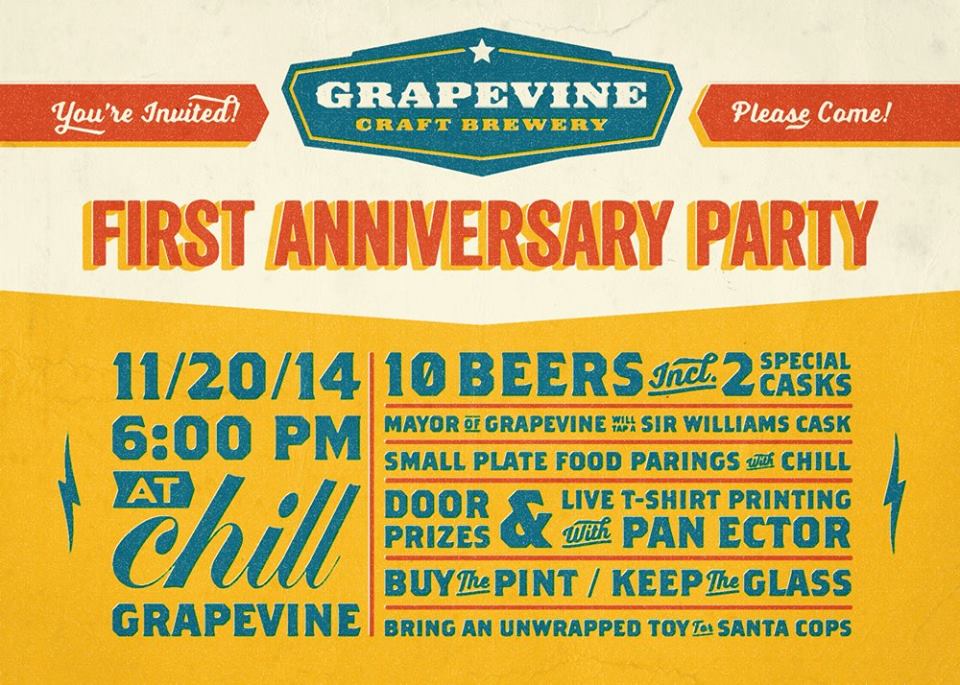 This week in DFW is all about anniversary celebrations and fabulous beer and wine-paired dinners. Plus, check out new restaurant openings and closings.

Chipotle Benefit for Texas Scottish Rite Hospital for Children: Grab any meal at a Dallas-area Chipotle today and 50% of the proceeds will be donated to the hospital.

Rahr & Sons Beer Dinner at AF+B: A four-course, beer-paired dinner will be served at the Fort Worth restaurant beginning at 6:30. Courses include crispy pork rillete with a brussels sprout chow chow, wood-grilled cobia with clams, braised beef cheeks with farro and a pumpkin cake with haute goat cheese.

Eat Meat, Drink Buffalo: Kent Rathbun, Buffulo Trace Distillery and Eddie “Lucky” Campbell are joining forces to bring you a four-course, bourbon-paired dinner. It will be held at the Filter Building on White Rock Lake from 6:30 to 10pm. Email events@kentrathbun.com for reservations.

Deep Ellum Wine Walk: What could be better than a night of wine and shopping in Deep Ellum? The Deep Ellum Community Association and Deep Ellum merchants invite you to enjoy wine samplings and explore neighborhood shops. It costs $5 and takes place every third Thursday of the month from 5 to 8pm.

Oysters and Champagne Thursday at Proof+Pantry: This is the second-to-last Thursday to enjoy oysters and French champagne at very special prices. Get in on the fun with Ruinart champagne and East Coast oysters.

Three Sticks Wine Dinner at Grace: A five-course meal paired with wines out of Sonoma County will be served beginning with a reception at 6:30pm. Dinner begins at 7 and includes veal tortellini, pork short rib, pear and smoked blue crostada and more.

Beaujolais & Beyond Wine Festival: The 31st-annual, French-inspired event will be held at the Irving Convention Center this weekend. Your ticket includes a commemorative wine glass, food tastings, French and American wine and craft beer tastings, live entertainment, a silent auction and more.

Chefs at the Market Cooking Class: This week’s class will be held by Chef Joanne Bondy of Stocks & Bondy under the theme of Maple Syrup: The Grading Truth– Sweet and Savory.

Rahr & Sons 10th Anniversary Celebration: Round out the weekend’s celebrations with the brewery with an extended tour and tasting event featuring more than 30 rare beers for tasting. Your ticket gets you a collectible glass, live music from Big Mike’s Box of Rock, and the opportunity to customize a commemorative t-shirt and eat from some of your favorite local food trucks.

EZ Dude and Cepage 2820: EZ Dude BBQ in Deep Ellum has closed and will be replaced by a French Bistro called Cepage 2820. Expect French staples like rabbit, French onion soup and croque madam. Cepage is scheduled to open by Spring 2015.

Reverie Bakeshop: The Richardson bakery has debuted a vegan and gluten-free take on the popular Samoa Girl Scout cookie.