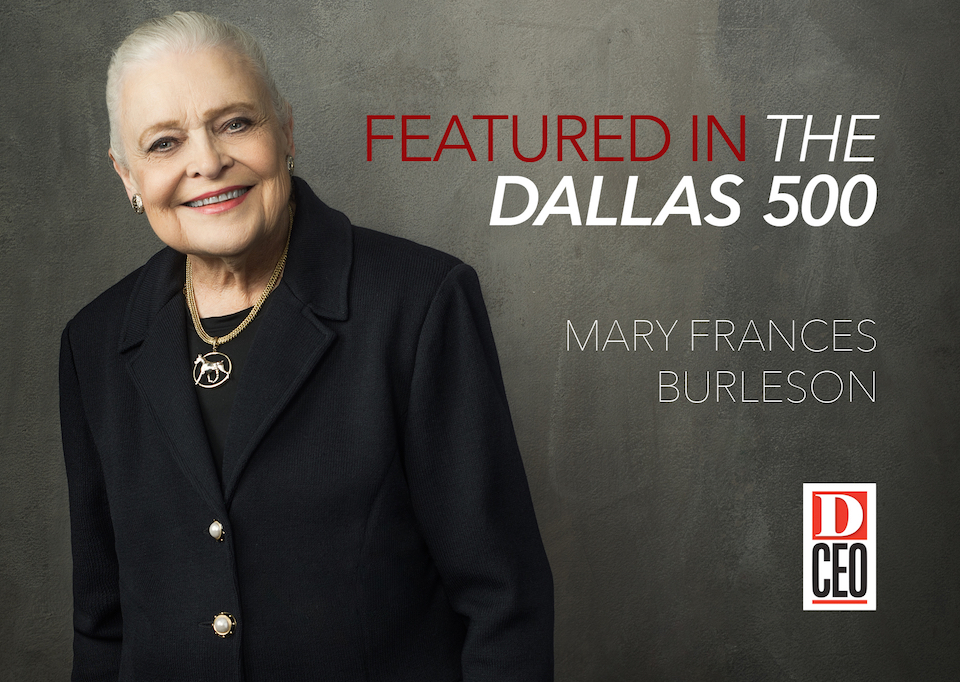 Mary Frances Burleson, president and CEO of the Ebby Halliday Companies, is featured in the newest edition of D CEO Magazine’s The Dallas 500, the region’s definitive directory of the most powerful business leaders in Dallas-Fort Worth.

Featuring leaders in more than 60 categories, The Dallas 500 is a special edition publication that celebrates the most influential leaders in North Texas. Unprecedented in scope, The Dallas 500 provides an engaging, personal look at the people that make Dallas such a powerful economic force.

Mary Frances’ story is engaging, to say the least. In 1958, she was a temporary worker with Jobs Unlimited and was sent to Ebby Halliday Realtors as a part-time secretary and receptionist.

Mary Frances was inspired by what she saw: sales associates who were enjoying and thriving in their careers. “My husband said that I had looked over the garden wall when I started working for Ebby Halliday and that I was never the same again,” says Mary Frances. “Ebby mentored and helped many, many people to find their career path … and I was one of the fortunate ones.”

Ebby quickly recognized Mary Frances’ talent, and with Ebby’s encouragement, she rose through the ranks of management positions to eventually become the chief executive of Ebby Halliday Realtors. Under Mary Frances’ guidance, the firm has grown to become the nation’s 10th-largest residential real estate company in sales volume.

As the chief executive of the Ebby Halliday Companies, Mary Frances has had the opportunity to speak and serve widely; but she has always held firm to the belief that her role is simple: to help others – in particular, the company’s agents and staff, to achieve their goals.

In 2013, Mary Frances received the National Association of Realtors Distinguished Service Award. Out of approximately 1 million Realtors, no more than two are recognized with the award each year.

In 2014, Mary Frances was the recipient of the Highland Park Independent School District’s Distinguished Alumni Award. The award recognizes graduates who have distinguished themselves through their achievements in their field or contributions to society.

In 2015, Mary Frances was honored with the Dallas Business Journal’s Women in Business Award. The award recognizes outstanding Dallas-Fort Worth-area women business leaders who not only are making a difference in their industries, but also in their communities.

And, earlier this year, Mary Frances was honored as D CEO’s Residential Real Estate Executive of the Year. The award recognizes outstanding achievement in the residential real estate sector.

Mary Frances is a very civic-minded member of the Dallas community. Through her commitment to such groups as the North Dallas Chamber of Commerce, of which she previously chairman, she has helped make Dallas a better place to live, work and enjoy life.

Congratulations to Mary Frances and to everyone associated with the Ebby Halliday Family of Companies. As Mary Frances often says, she is blessed to be part of the best team in residential real estate.